Think back to a time when you were a child and watched a parade. It seemed to be a wonderful event and as one group passed by after another, it seemed to only get better. Although we loved seeing those things when we younger, most of us never lose the desire to see them when we are older. In fact, we typically gain even more of an appreciation for what they are doing and it makes it all that much more enjoyable. It’s something we look forward to and we love sharing it with our family as well.

One of the performances we might enjoy seeing is synchronized swimming. Admittedly, you aren’t going to see this style of swimming take place in a parade, when it is available to watch on TV, it is amazing. We can only really speculate on the number of hours it took to practice and to put everything together in unison. In the end, it is a show that looks lovely both above the water and below the surface. As it turns out, there is something else that gives us a similar experience.

The group of men that you see in the picture are the Royal Thai Navy soldiers and they had a singular purpose; they wanted to put on a show that was similar to synchronized swimming but they wanted to do it on dry land. When you see what they do in this routine, you will be amazed that they were able to accomplish it. 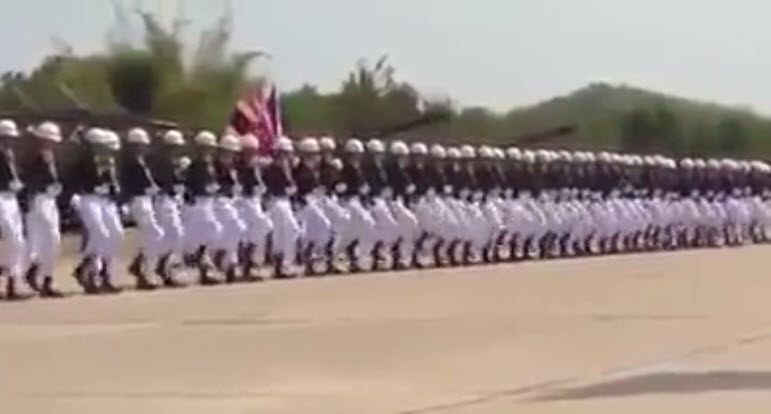 The Royal Thai Navy soldiers stood in a line and held their position until the music started playing. In order to make it as awesome as possible, they selected songs that would be familiar to each and every person in attendance. The first song was “It’s A Small World” but if you listen, you will also here “The Final Countdown.” It’s a great collection of songs to put together with this military performance.

It starts with some quick turns and with their rifles flipping to the side but it isn’t long before they start a full-on wave that ripples from one side to another and back again. Just keep your eye on the man at the left side of the line. He gets everything started and the chair reaction is enough to make you wonder how they were able to accomplish it.

Although there are many different parts of this performance that are noteworthy, one that is sure to blow your mind is when they do the slow motion wave. They do it so perfectly that it is difficult to tell if the video has actually slowed down during that time. Play attention to the music playing in the background and you will see that it isn’t special effects; it is the skill of these soldiers that makes the difference.

The choreography continues to roll from one side to another and throughout it all, they never miss a beat. Even when they have their backs to what is taking place in the line, they are still aware of what is happening all around them and their movements are almost too precise to believe. It’s little wonder that they are able to captivate their audience during the entire time that they are on the field. If anything, the spectators are left wanting more.

Did you used to play with dominoes when you were a child? We may have taken a very long time to stack them up in neat rows, making sure they are spaced perfectly apart. When you watch these soldiers moving in unison, try to envision that they are dominoes and that they are moving in that methodical way from one end of the line to the other. It isn’t only their bodies that are taking part in this dance, they move their hands, heads and legs perfectly together.

With one wave after another, this military group shows just what some practice and discipline are able to do. Although we don’t know how much time they spent preparing for this routine, we do know that it is something that came across perfectly when they put it all together.

Not only were the crowds able to enjoy what they were putting together; they took a video and shared it online for all of us to see.

You can watch the video below. If you watch it once, you will watch it again: