It doesn’t matter if you have a cat in your life or not, you probably recognize just how important those animals can be to a family. In fact, they often become an intricate part of the family and most of us could not imagine living our lives without our faithful feline companion by our side. They have the ability to wrap themselves around our heart and to truly change our lives from the moment that they enter into our household. Once they are there, they tend to be the center of attention. That’s true, at least when they demand it.

We never know what is going to happen that will change our lives and sometimes, the most unusual things come out of the blue. It happened to a man named Jerry Smith last August when he was outside doing some yard work. Jerry is a veteran that has some rather difficult issues he is facing. Before we start talking about those issues, however, let’s talk about the experience that he had while he was out working in his yard. He found 3 kittens stuck in the bushes nearby and the mother wasn’t far away. As soon as he found them, he tried to get them to safety.

Jerry Smith has some health issues and although he is young, he has been facing these issues for some time. He is a veteran and he served in the Army but at the age of 28, he suffered a stroke. As a result of his stroke, he is now paralyzed on his right side and most of us couldn’t imagine living with that type of difficulty. Despite the fact that he is disabled, however, he never asks for help from anyone but on this particular day, he called his wife over so she could see something important. 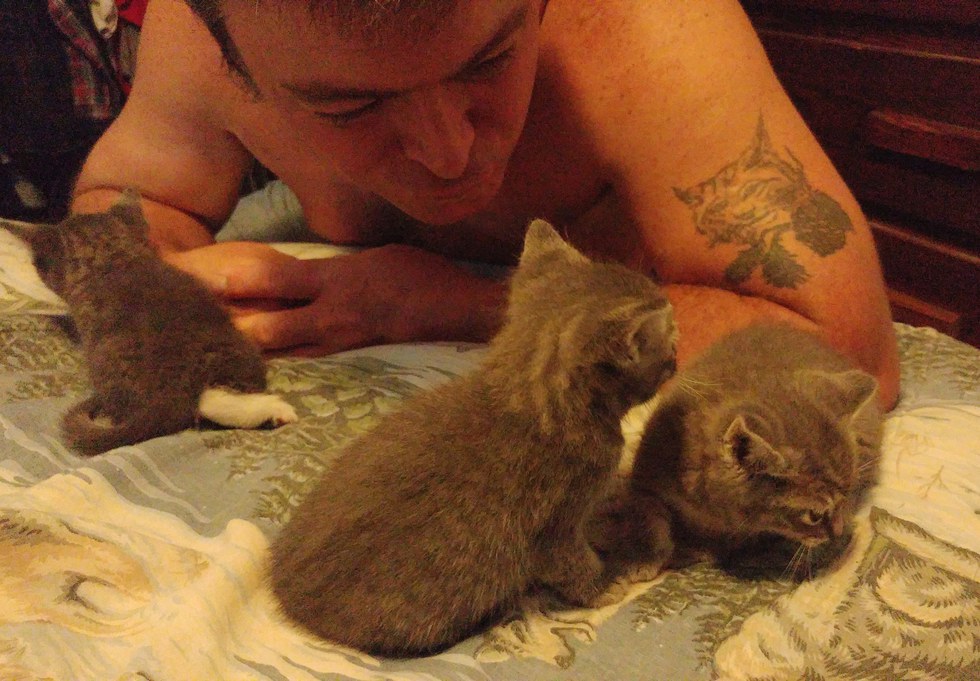 His wife said that she was working with her husband in the yard and she was surprised when he came in that day and demanded that she come help him. She realized that he doesn’t typically ask for help until he is frustrated. When she asked for details, he simply said: “Just come help me with the cat.”

His wife, Patty, realized that he couldn’t have been speaking about their cats because they lived inside and she could see them. When she went outside, she saw Jerry on the ground on his knees next to the shrubbery. He started handing her one kitten after another.

After moving a wooden planter to remove the last kitten, he pulled more away to make sure that no kittens were left. 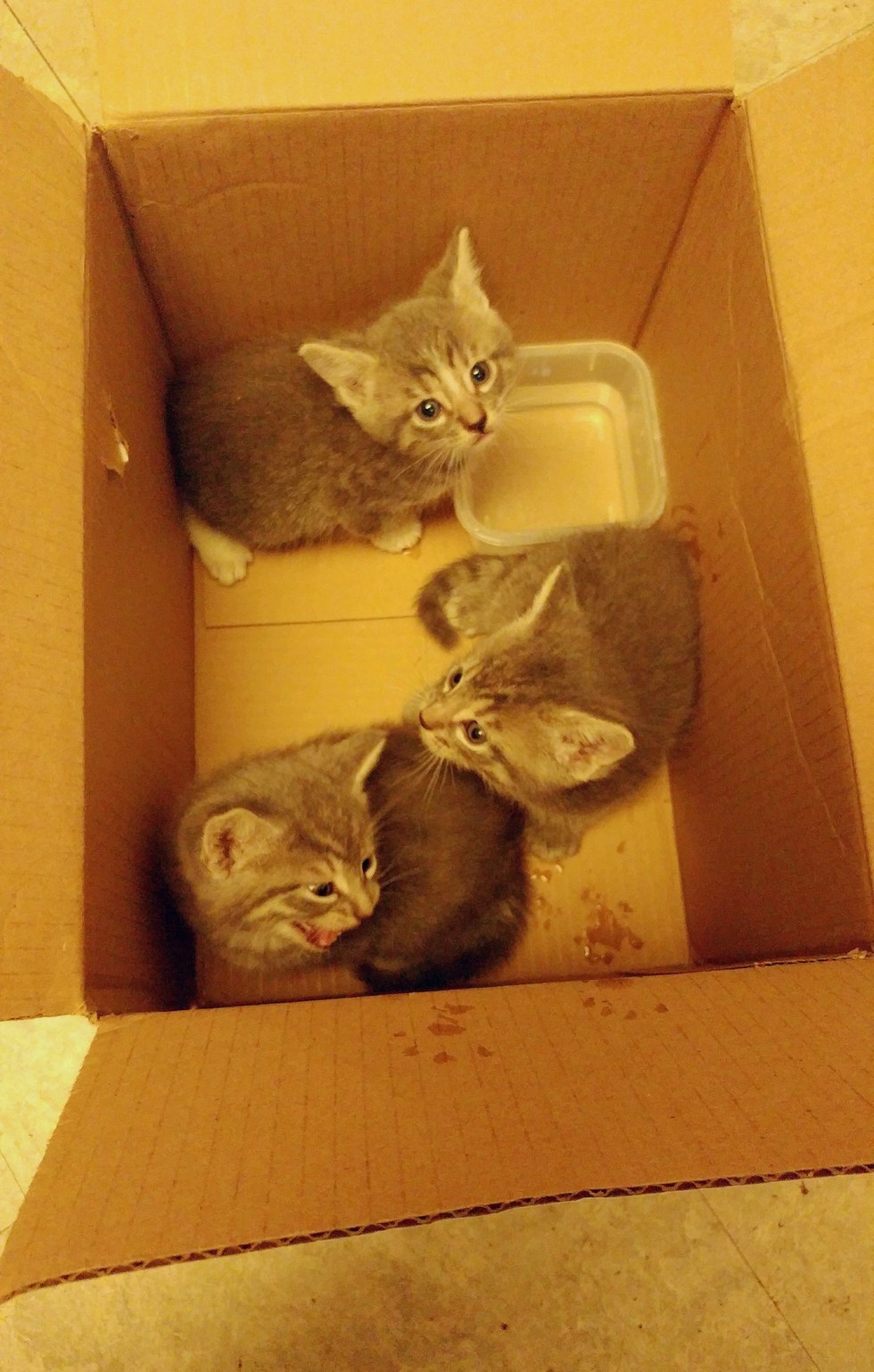 While Jerry was busy working on the kittens, the stray mama cat was standing out in the middle of the yard. She watched intently as all of her kittens were scooped up from the bushes and then she walked away, knowing that they were in good hands. The mama cat never returned.

As it turns out, Jerry had run into the cat a few days earlier in the garage. He couldn’t reach the kittens at that time but on this day, he retrieved all of them. 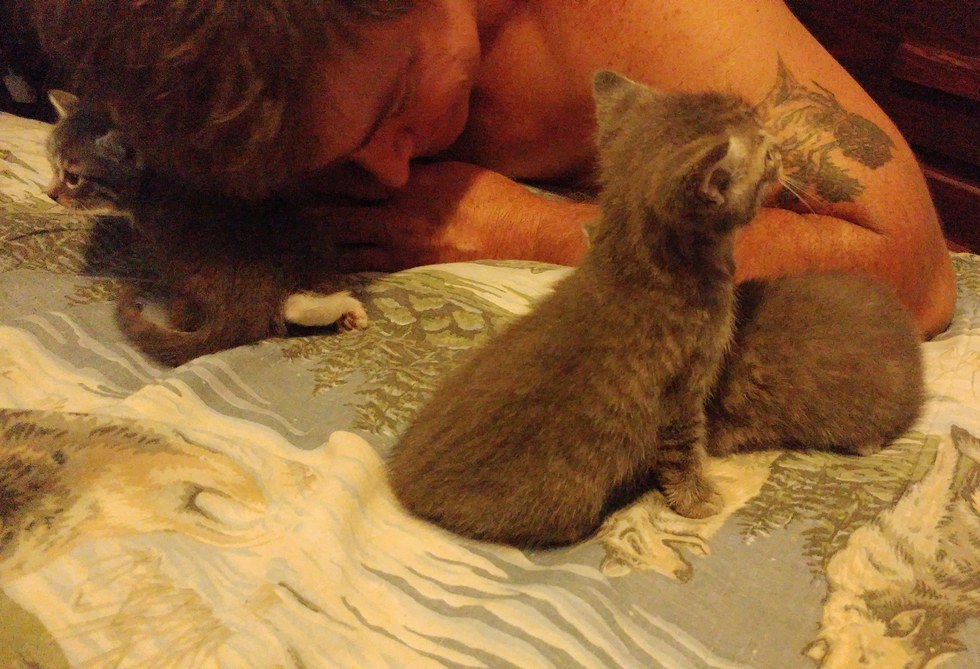 “I brought the three tiny kittens indoors and put them in a cardboard box and then into the bathroom so they’d be safe from our other pets.”

It is not known how old these kittens are but it is thought that they may be approximately eight weeks old. They were young enough that they still needed some help learning to eat so the family was feeding them food soaked in water. It only took a few days and they were eating on their own. 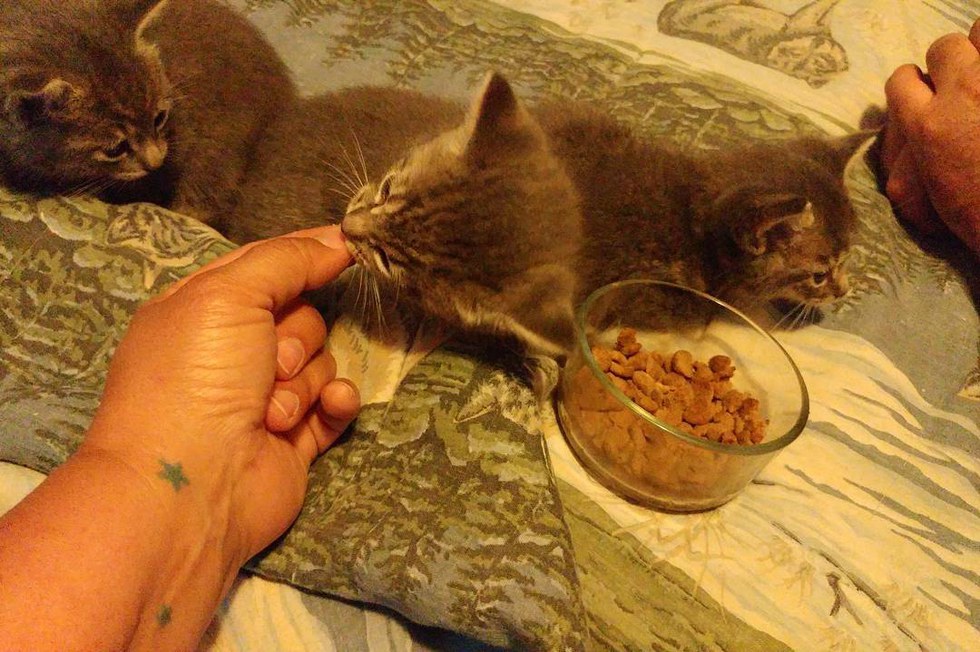 Patty started looking for good homes for the kittens once they were big enough. Jerry wasn’t able to express himself and his emotions because of his stroke.

After she peeled back some of the onion layers, however, he admitted that he didn’t want to give the kittens away. He loves cats and in fact, he left the crawlspace in the garage open for them. 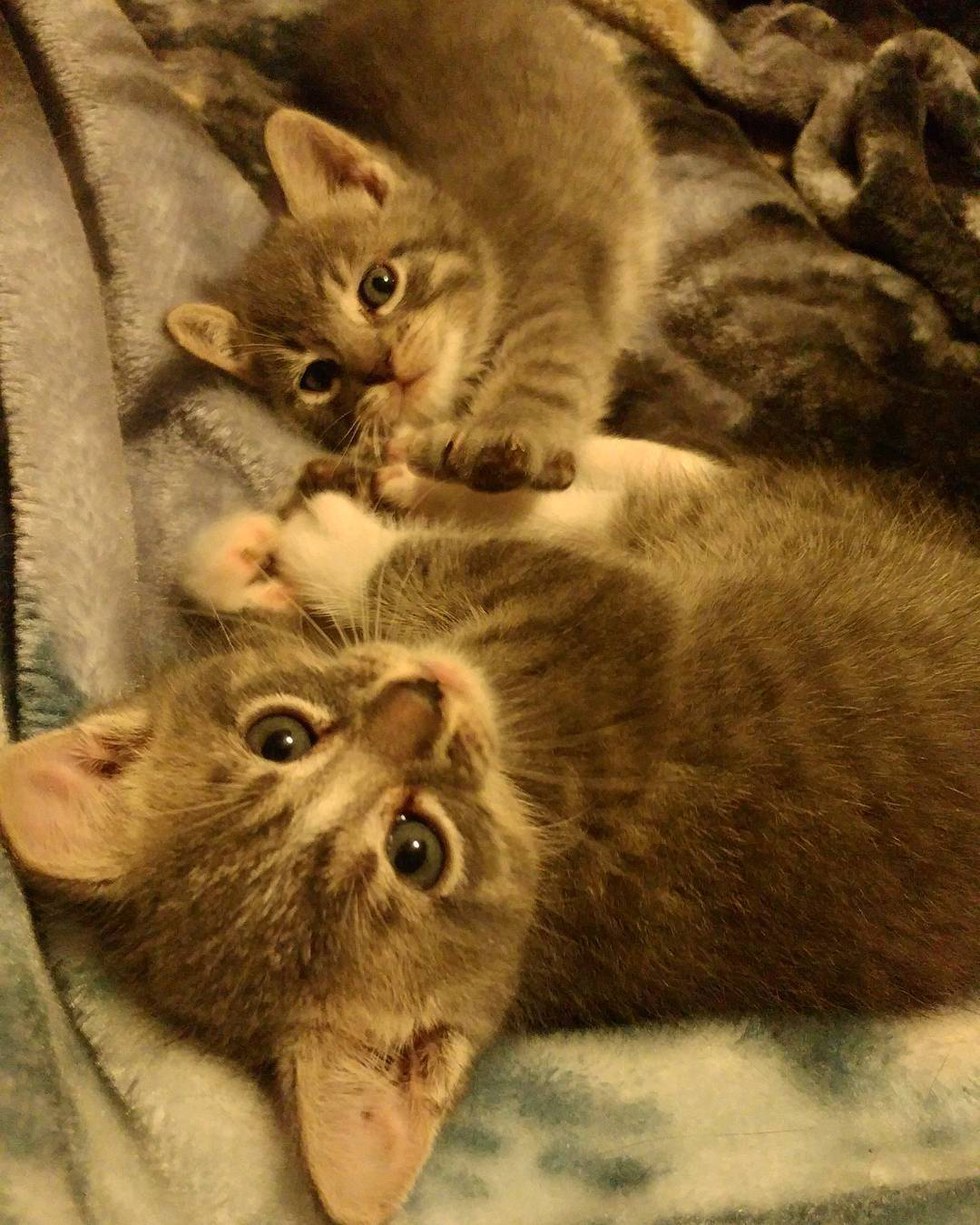 Patty and Jerry rescue animals so it is not out of the question for them to have many animals in their home. You can add three new kittens to their mix of two adult cats and a number of dogs as well!

The kittens were given names. The kitten with white feet is Boots, Ash is the lighter gray cat and Cinder is the third.

Boots didn’t have any problem moving right into her new role as the household cat. She will stare directly at the human and demand attention.

Could you resist that face? 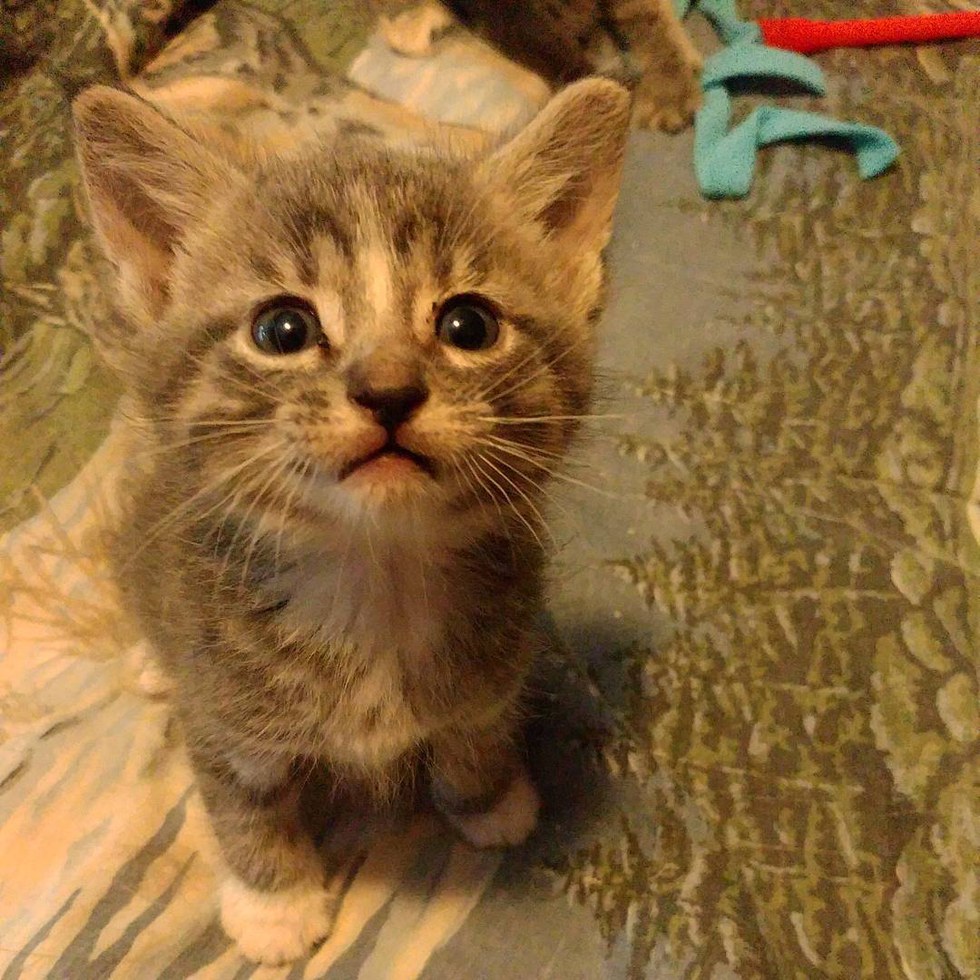 Emmy is their 10-year-old rescued cat and she was introduced to the kittens. There was some adjustment that was necessary but they get along beautifully.

Emmy even tolerates being snuggled by the kittens. 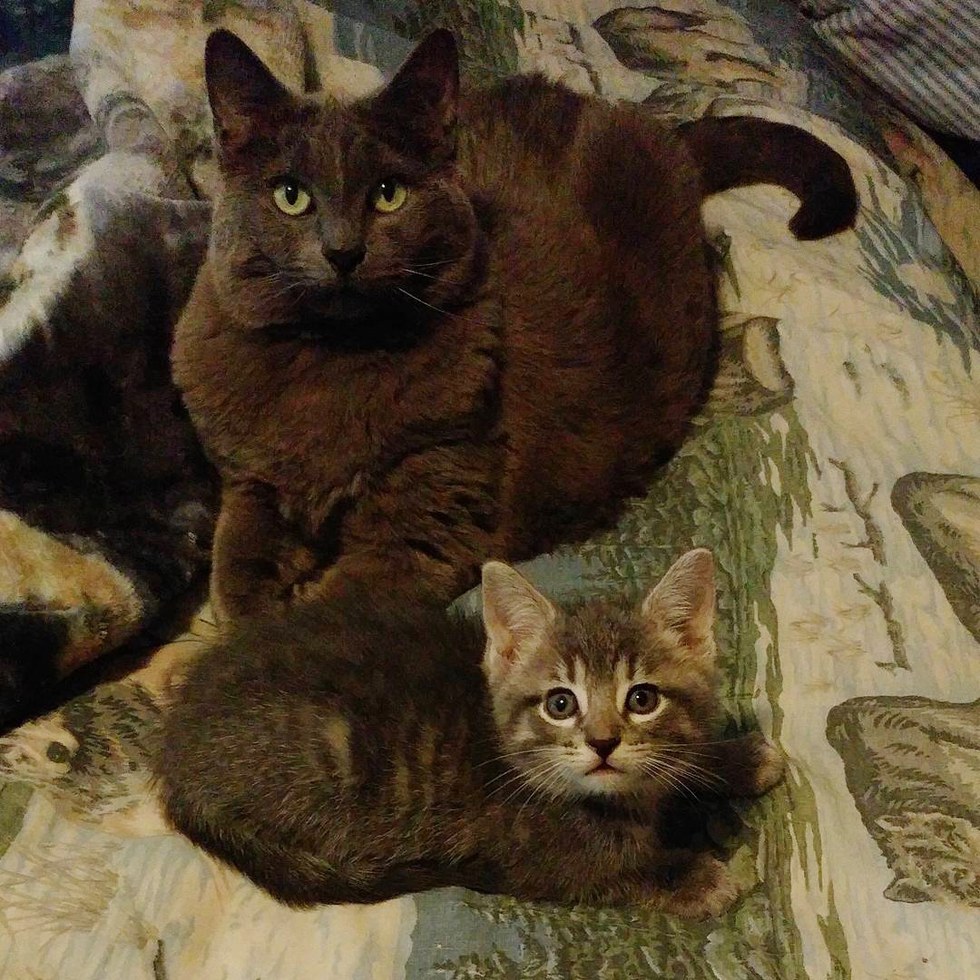 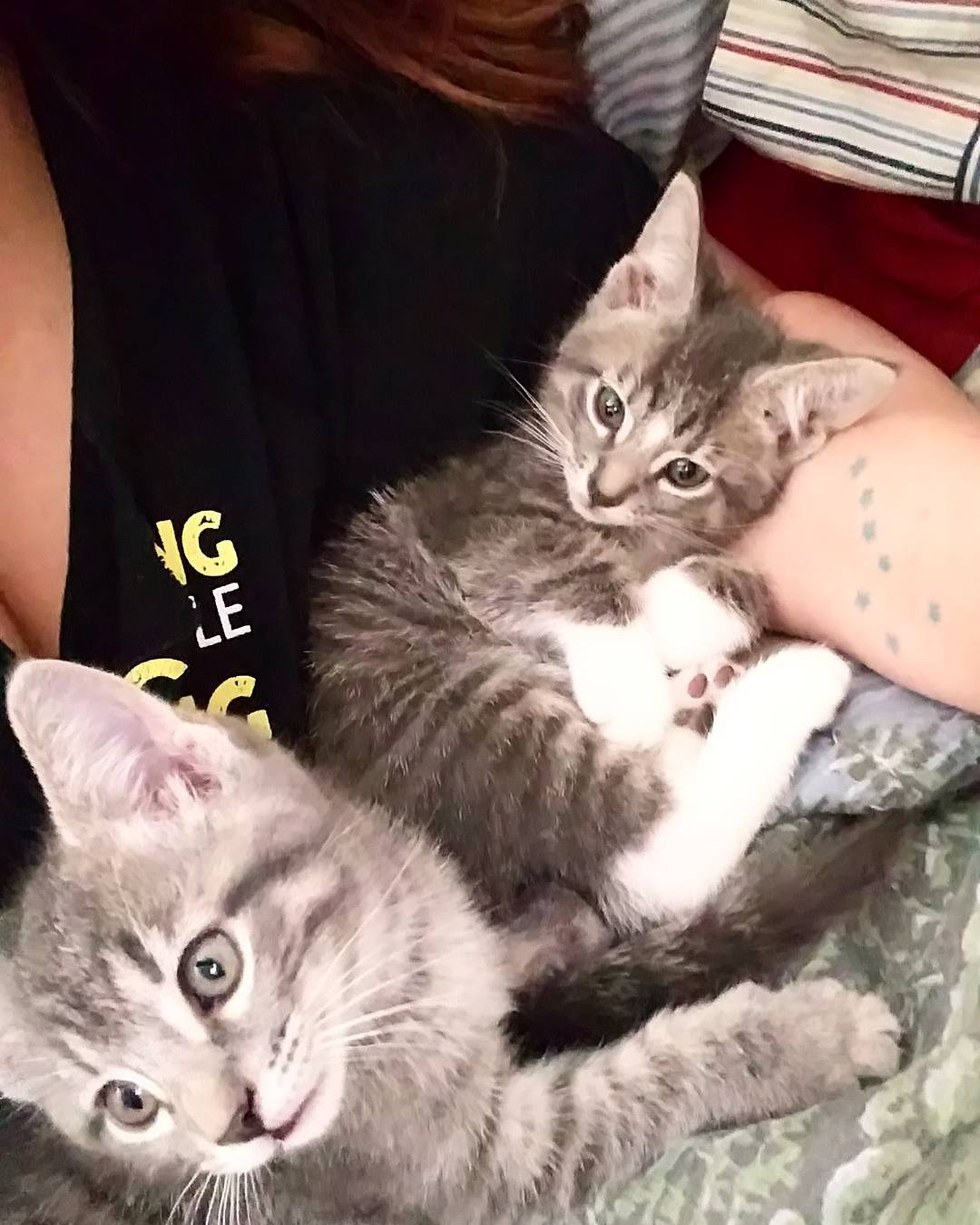 These kittens are growing like weeds. It isn’t known why the mother cat let Jerry take the kittens, but perhaps she could tell that he had a big heart. 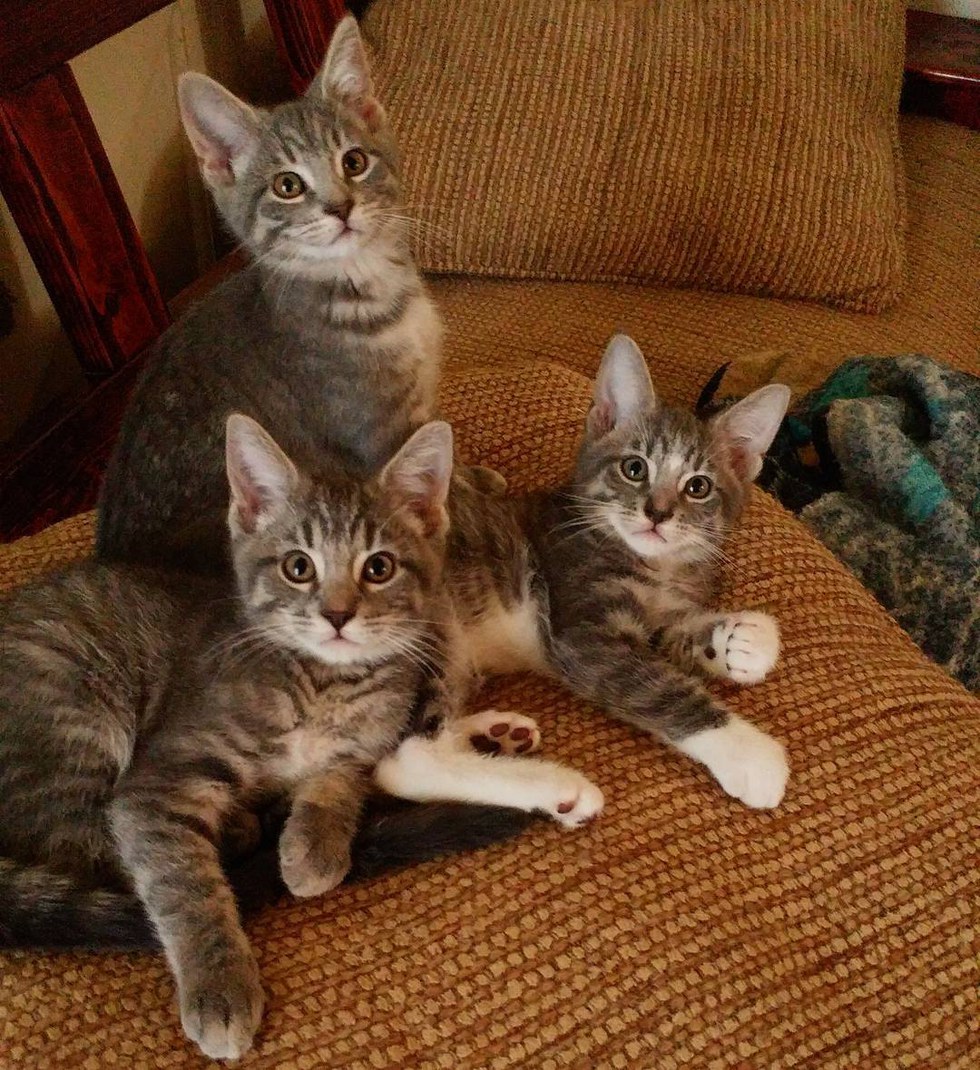 You can see boots playing in this video: