Many of us see stray cats on a regular basis and we don’t typically give it too much thought. Those of us who have cats in our family recognize that they are an intelligent, kind and wonderful animal and we wouldn’t want to live without them. Stray cats are very similar and although they may avoid contact with humans, for the most part, they are still the same animal that we have in our families. That is why many people will do what they can in order to help these cats that are living out on their own.

In Texas, a man crossed paths with a stray cat and he ended up with an experience that was nothing short of amazing. The cat wandered right up to him and began looking for some food but it wasn’t long before the man discovered that the cat actually wanted something much more. He discerned that she wanted a safe place to be so he provided it for her and after taking her in, he got a surprise that changed his life from that point forward. This stray cat, who wandered up to him at random gave birth to five tiny kittens!

In this first picture, you can see the mother cat with her kittens. Although she is a stray, it seems as if she is well cared for and the man has obviously already adopted her because she has a collar on. This is a fortunate cat who has found herself a loving home where she can raise her young kittens. 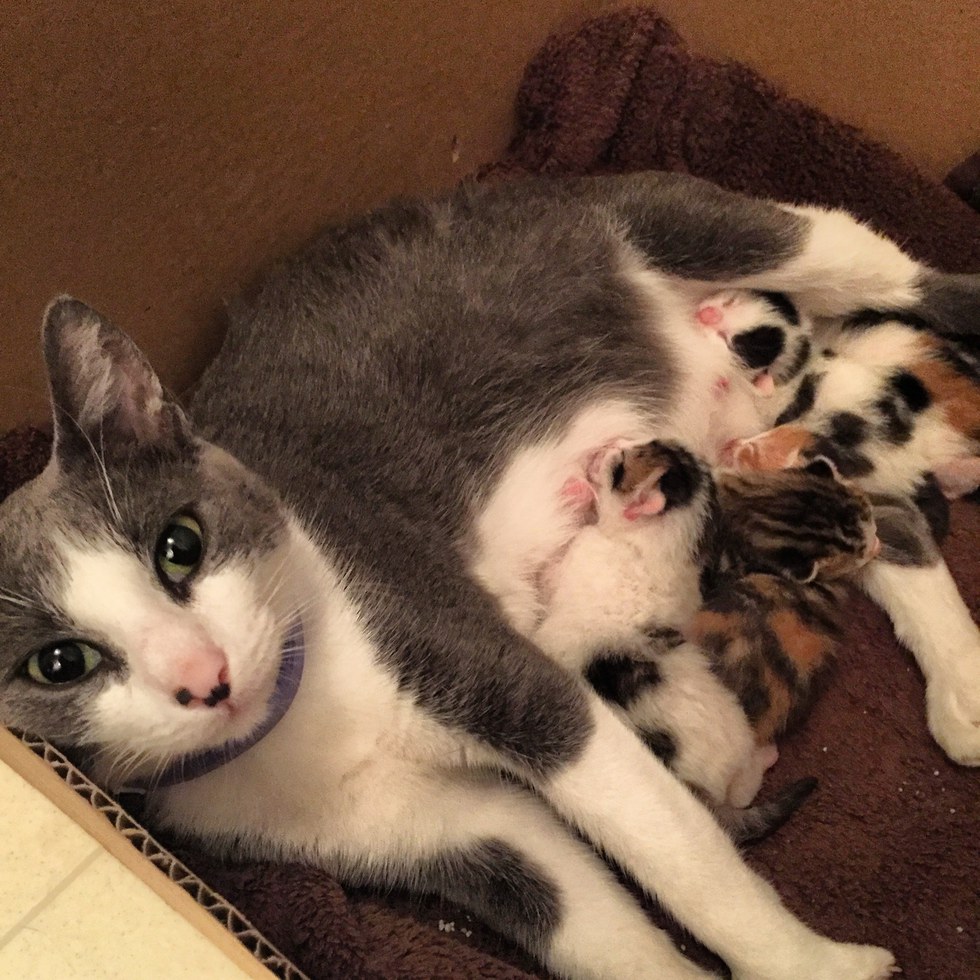 This chance encounter occurred in July when the neighborhood cat walked right up to the man and begin looking for some food. This man couldn’t resist taking the opportunity to feed a cat that needed some help but the cat decided that she was ready to move in at that point.

If you have a cat in your household, you recognize the fact that they are very discerning when it comes to humans. In fact, most cats are able to size up the situation and to determine if a person is trustworthy from the moment that they see them! Obviously, this man has a soft spot for cats in this heart so this cat had no problem moving in and becoming part of his family.

It wasn’t long before the cat began showing some signs that she was pregnant. They thought that they had thought they were feeding one stray cat but they were actually now housing and feeding multiple cats! By August, this sweet cat had given birth to five adorable kittens and they were ready to start their new life in a home where there was plenty of love. 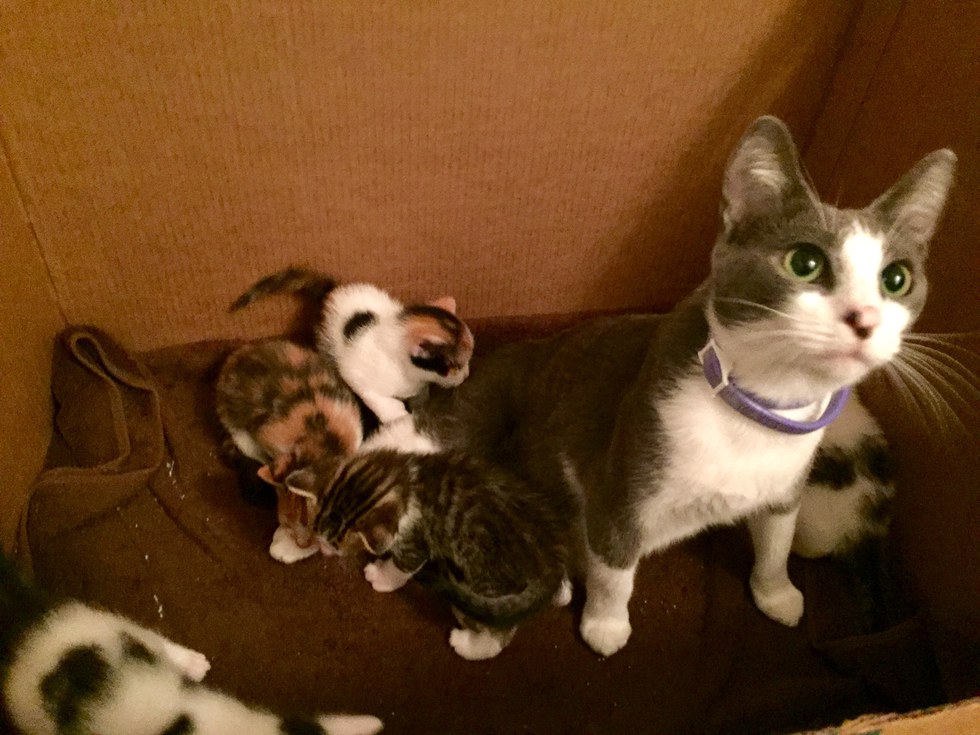 Although the cat was very trusting of this man, she is still protective of the kittens. From time to time, she still allows this man to come in and take care of the cat when she is ready for a break. His sister is also able to help because she lives nearby.

When his sister came by, she would put a few kittens on her lap and then the mother cat would jump up to get some attention as well. The kittens were trying to nurse while they were on her lap. His sister is also nursing her baby, so she has some empathy for this cat. 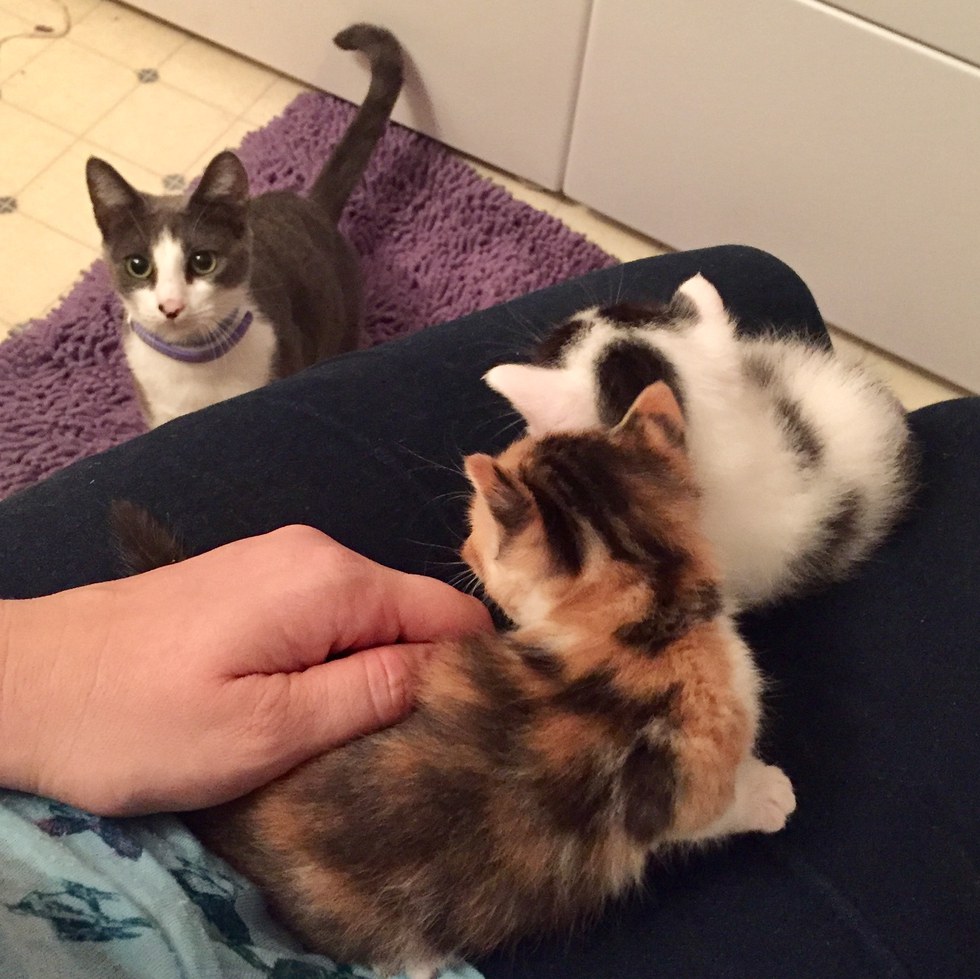 Raising kids is hard work, regardless of whether you are a cat or a human. This mama cat works around the clock to nurse her children and to groom them.

They try to resist the grooming from time to time, but she insists! 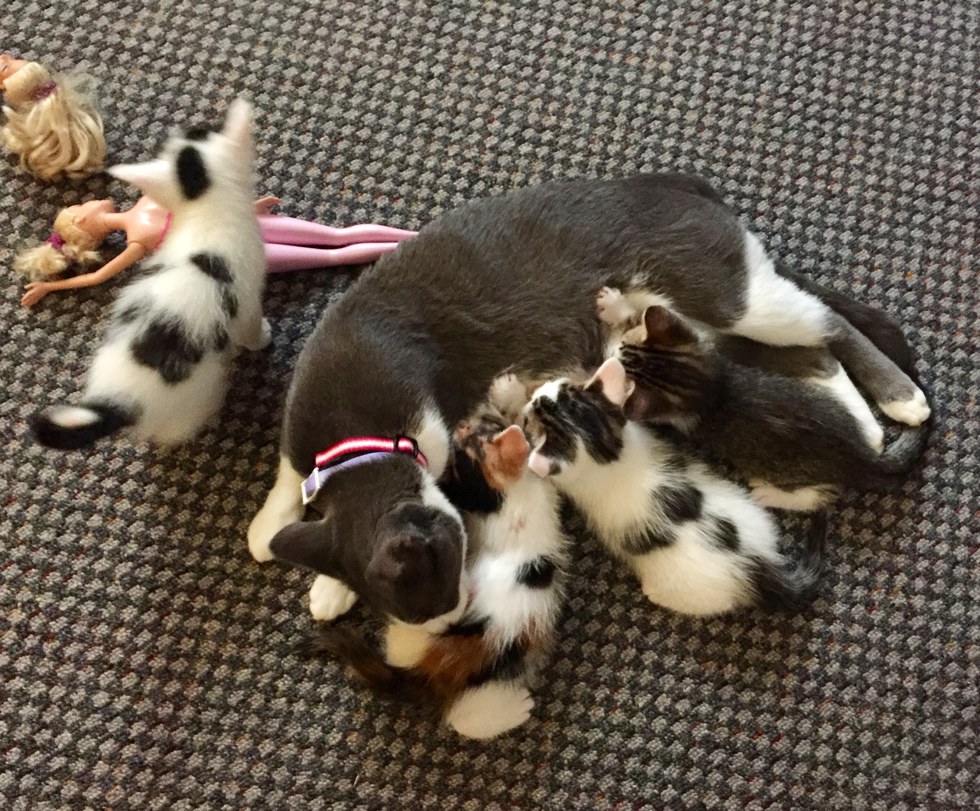 When the kittens are old enough, the family will have them neutered and spayed and the mother will be spayed as well.

The kittens will then be available for adoption to good homes. The mother, however, has already found her forever home. 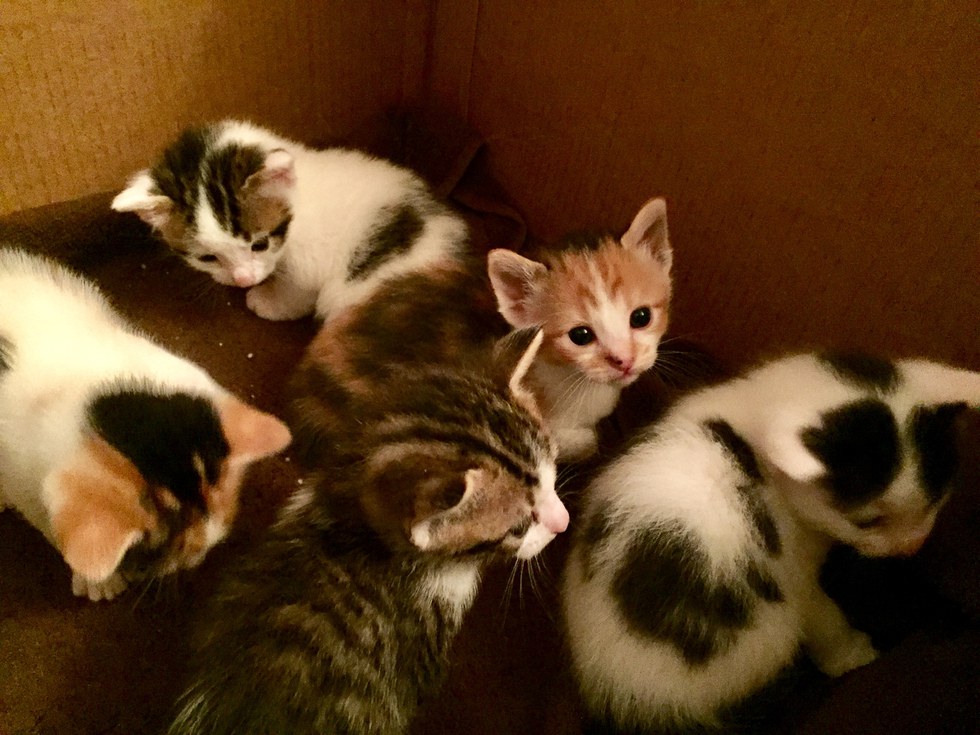 The sister, who visits the cat on a regular basis, fell in love with the calico you see in this picture, named Ruby. She also loves Jasper, one of the other kittens. They are the first kittens to be adopted and they will be living with the woman who helped care for them from birth!

The calico likes to stare at the human mother when she is around. 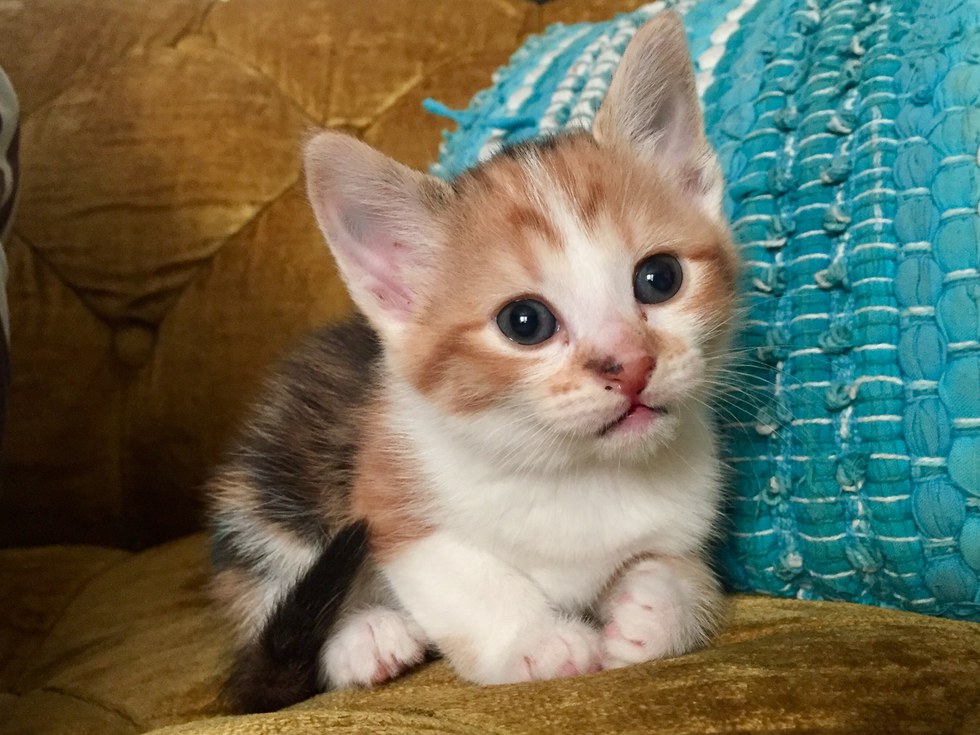 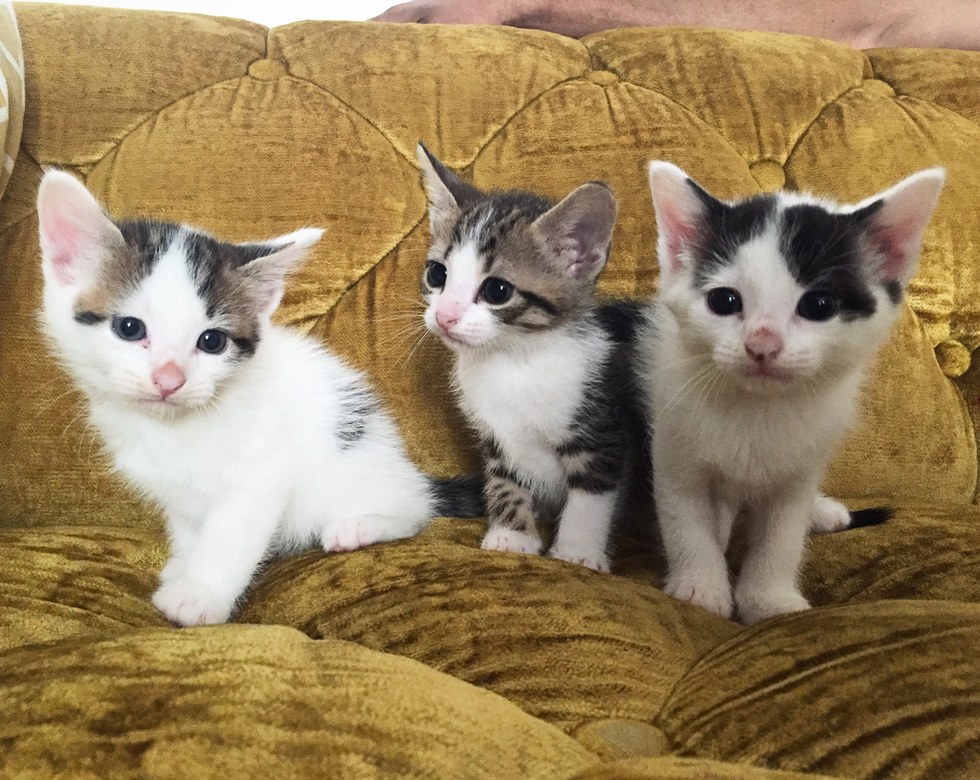 Jasper and Ruby have already moved into their new home. Everything is going well and they are getting comfortable with their new surroundings. 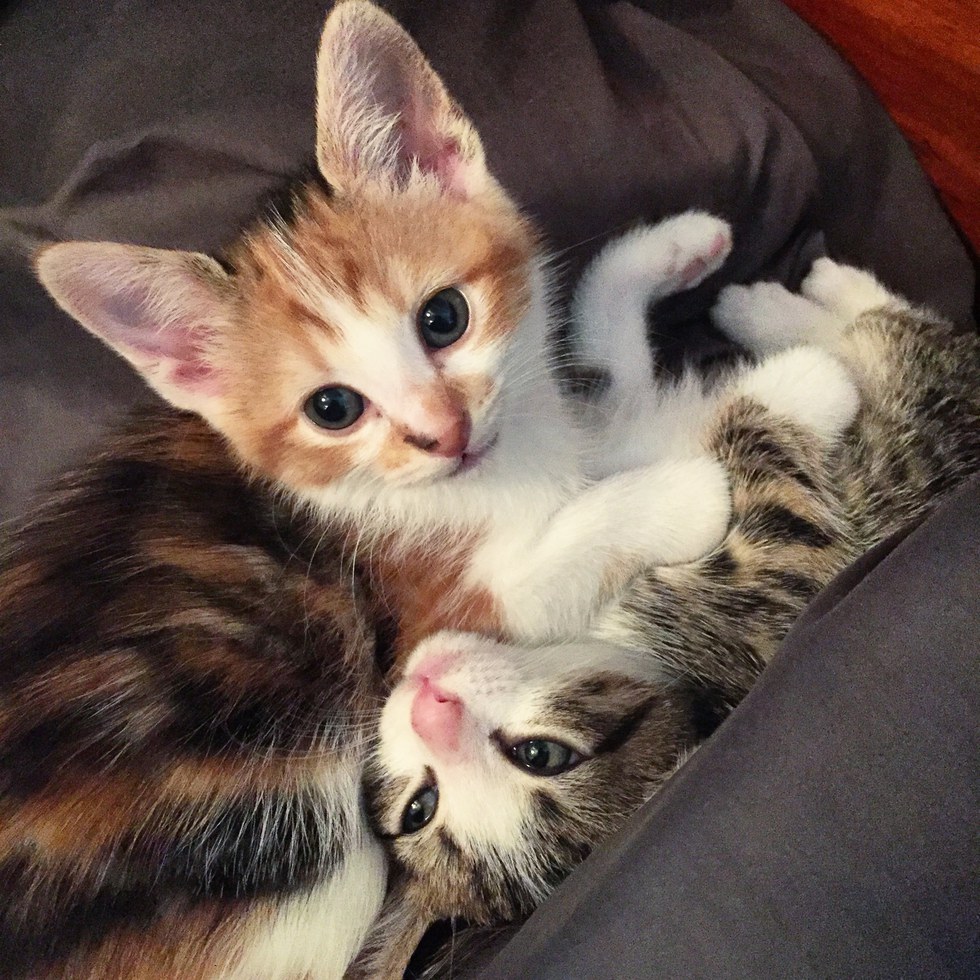 This mother cat was so wise to find a perfect, loving family where she could raise her kittens. Now her entire family will find forever homes! 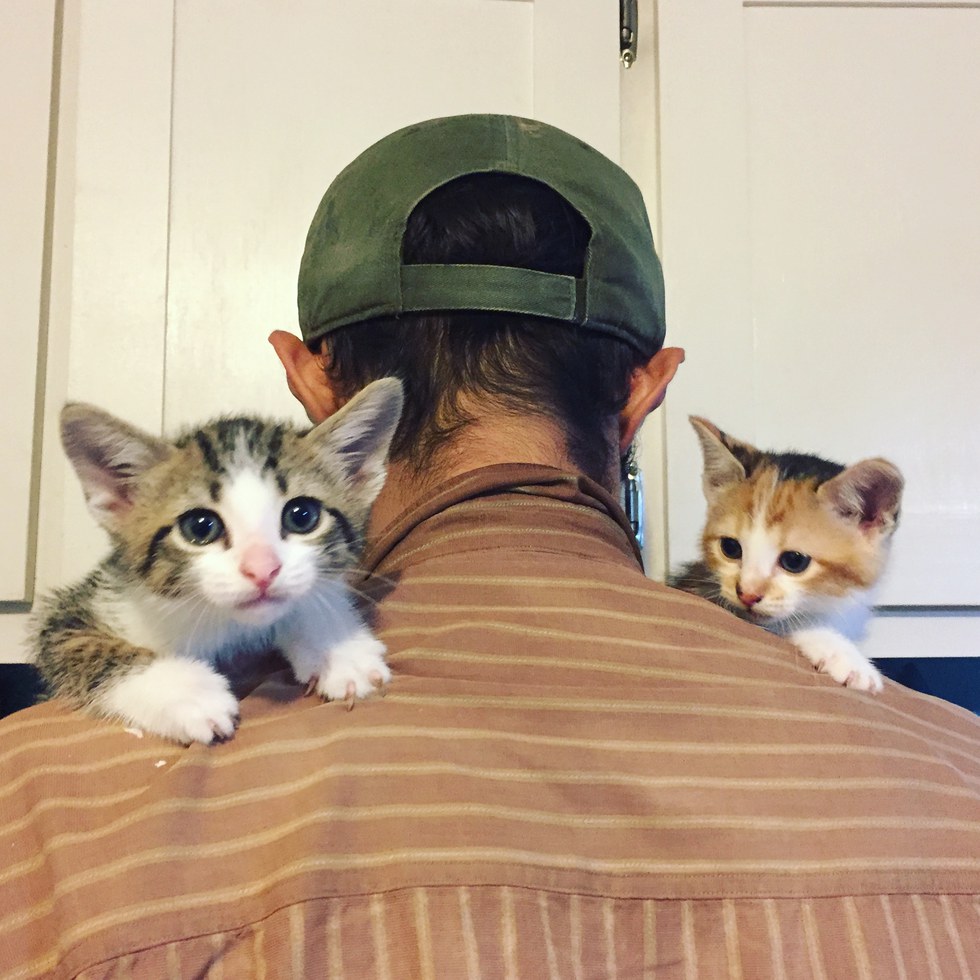